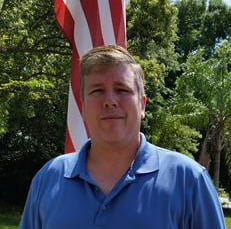 Donald Mair is a candidate for the Florida House of Representatives for District 27, which is on the east coast and includes Deltona and Orange City.  He has lived in Deltona since 1996 where he worked in construction until 2010.  He is now in school for Paralegal studies, and will graduate this May.  In the future, Mr. Mair plans to help people that have legal questions, but can’t afford high attorney fees, to get the answers they need.  We had the chance to talk with Donald by email regarding how he got into politics, the issues that are important to him, and the current political climate.  Read on to find out more about this independent candidate looking to represent District 27 in Tallahassee.

How did you become interested in politics and then what led you to actually step out and become involved in the process by running this campaign?

Mair: For almost 6 years I have been an advocate for student safety.  On June 1, 2010 my daughter, Gabrielle “Gabby” Mair, was hit by a car at her school bus stop.  She passed away the next day.  I started looking into how school bus stops are placed and what laws and guidelines are used to provide protection for students.  I found there really isn’t any.  I started speaking to the school board, county council, and local lawmakers urging them to do more.  Even as the news reported more and more students killed, they always ignored me.  In the process of raising public awareness I have spoken with hundreds of my neighbors.  I listened to their frustration over their concerns about our community always being ignored as well.  I had gotten a senator and house member to file a bill last year, but it died.  I immediately filed to run for the Florida House of Representatives for District 27 to get the things done to help protect students and my community.  (Note from Independent Florida: To find out more about Donald’s success with “Gabby’s Law”, visit: School Transportation News)

What experiences do you have that will be valuable in the Florida House of Representatives?

Mair: I have never held a public office before. My experience is with listening to my community. Researching and finding answers and solutions to the problems and communicating those solutions to our legislators. That is what is missing in Florida legislation now. Too many in office refuse to debate an issue and keep their minds open to possible solutions. In the 6 years I have been involved in our state’s lawmaking process, I have learned that the problems we face are not unique to Florida alone. Homelessness, lowering taxes, creating jobs, protecting our students, and many others are issues every state faces. By researching what other states do and communicating with the people who live those issues we can find and create solutions that are economically viable and beneficial to all.

What made you decide to run as an independent, and do you think that negatively impacts your chances in the campaign?

Mair: Like most Independents and No Party Affiliation voters and candidates, I once belonged to a major party and became frustrated with the lack of progress. While the major party candidates campaign for office, they tell us what we want to hear, but while in office they do the complete opposite. As one presidential candidate mentioned recently, there is no difference between Republicans and Democratic candidates anymore because they are both bought and paid for by the same corporations and special interest groups. I don’t think running NPA negatively impacts my campaign, but it does make earning votes harder as so many people, just as I once did, vote strictly on party lines.

What do you think are 3 biggest issues facing Florida, and how do you propose that we address them?

Mair:  Florida has a lot more problems than just 3, and I think all are equally important. Some of the issues are just a matter of enforcing our laws.

Wasteful spending of tax money also needs to be addressed. One of the biggest wastes is the death penalty. We spend over $50 million a year on death row inmates appeals. Those appeals can go on for decades wasting hundreds of millions of dollars before the sentences are carried out, and as the famous quote says, “justice delayed is justice denied.” By eliminating the death penalty, we can save approximately $48 million a year which can be used to improve our state’s mental health and homeless programs which in turn would save taxpayers even more money by lower jail populations.

Job creation is another issue that needs to be addressed. Governor Scott uses our tax money to travel the country to try and lure companies established in other states to Florida. There are plenty of Florida small business owners who could use that travel money to help their business expand and grow. Plenty of Florida entrepreneurs who are searching for a loan or grant to help turn their idea into a vibrant business. We need to eliminate and reduce the regulations and blanket policies that hinder small business growth and look at each applicant for a state small business loan or grant as an individual. A person who maxed out their credit to get a business going and is getting that business going should be offered a helping hand. I have met dozens of small business owners who struggle to get their business out of their garage and into a store front who are penalized for their ambition. Those ambitious Americans are the embodiment of the American dream and we should be helping and encouraging them as their business grows, not feeing them and killing their spirit.

Although it’s handled at a federal level, what, if any, tax reforms would you propose/support?

Mair: Each year grocery stores and restaurants throw away millions of pounds of edible food. Food that charities would love to have to help feed the needy in their community. I would like to propose a tax credit to the food industries who give edible foods to charities rather than a tax credit for throwing it away.

Do you feel that occupational licenses and marriage licenses serve a needed role in Florida, or could they stand to be reduced or eliminated?

Mair: Occupational and marriage licenses are important. Some industries need to be regulated to ensure public safety. Tattoo shops for instance need to be licensed to ensure cleanliness and sterile use of needles to prevent the spread of disease. There are unscrupulous people who would reuse needles to save money if we didn’t have license requirements and inspections.

What is your opinion on the war on drugs?

Mair: The selling of dangerous addictive drugs and drug addiction is a serious problem worldwide. We should always work to protect ourselves from the dangers of addiction. We should also learn from past mistakes and fight the most harmful risk to our community and state. The blanket policies and minimum sentencing guidelines need to be changed. A person arrested for a small amount of marijuana being used for personal habit shouldn’t be sentenced to prison the same as the person selling crack. The punishment should fit the crime and the crime should fit the punishment.

What are some things that voters would not know about you (hobbies, family, talents, etc.)?

What would you say to people that are frustrated with the current political process and partisanship?

Mair: Research the candidates. Look at campaign contributions. Are they backed by corporations or citizens? Look at the incumbent’s legislative record, did he/she vote on policies the way you wanted them to or the way their donors did? Albert Einstein said that the definition of insanity is, “doing the same thing over and over again and expecting a different outcome each time.” Voting for the same party candidate each time won’t bring the change we need in our state. The name of the party candidate may change but the policies will remain the same. Independent and NPA candidates offer a change to the “business as usual” politics of the major political parties and should be taken seriously.

How can people make a difference to change the current political climate?

Mair: Get involved.  Too many people get frustrated and think not voting is the solution, when in reality it does more damage.  Choose the candidate you are willing to vote for and get involved in his or her campaign.  Talk to friends and neighbors and introduce your candidate to them.  Most importantly, when your candidate is elected, hold them to their campaign promises.  Call, email, and visit their office and hold them accountable.  If a person doesn’t fulfill their obligations to the citizens who trusted them enough to vote for him or her, then they lack the moral fortitude and ethics to be in that office.  That is how we Americans make our vote count.

For more information check out:

We appreciate Donald taking time out of his schedule to talk with us.  Make sure to follow Donald’s website and Facebook for the latest news and events, plus information on how you can become involved if you would like to support Donald Mair’s campaign.  Don’t forget to join the discussion in our Florida Elections Forum to let us know what you thought of this article, and check into the other forums for any other political thoughts that you would like to share.  We would love to hear from you!

*Independent Florida does not endorse any candidate or organization in connection with this or any other article. We strive to educate voters on their options, so they can make informed decisions. Additionally, we try to provide a media platform for candidates that don’t receive the same funding of major political party candidates, so the independent/3rd party candidate’s voice can be heard.